We've seen a number of impressive and accomplished guards throughout the PBA's 45-year existence. Here are some of the most notable backcourt combinations in the history of the league.

The Big J and Mr. Clutch had one of the longest and most fruitful backcourt partnerships. They played together for 15 years from the MICAA to the Philippine national basketball team and the PBA.

Jaworski and Arnaiz became the cornerstone of Toyota, alongside Ramon Fernandez, throughout the franchise's PBA life span. They won nine championships together before the team disbanded in 1983.

The dynamic duo reunited in Gilbey's Gin (now known as Barangay Ginebra). They became instrumental in turning the franchise around, making it competitive and endearing to Filipino fans. They played for a couple more years and won another title before Arnaiz retired, while Jaworski stayed on as playing coach until 1998.

For PBA fans, there's nothing like nostalgia. A handful of ESPN5.com writers present interesting and timeless pieces, tackling a wide range of unique topics.

The Fortune Cookie and the Sultan of Swipe are the most decorated backcourt pairs in this list with 13 championships and two Grand Slams in their resume, which they all accomplished with the Crispa franchise.

Co took home the MVP award in 1979. He topped the league in scoring multiple times, while Fabiosa dominated the steals and assists categories.

The multi-titled duo parted ways after the Redmanizers disbanded in 1984 but they briefly reunited in Great Taste before Co retired in 1988. They both ventured into acting after their basketball careers were over.

The Flying A and the Fourth Quarter Man played major roles in Alaska's golden run in the 90s. Abarrientos, who set the standard for succeeding Filipino point guards, impressed with his fearless drives and pesky defense. Lastimosa threatened opponents with his lethal shooting and clutch plays.

The Milkmen tandem willed the franchise to eight championships together in a span of six years, including a rare Grand Slam feat in 1996. Johnny A came away with the season MVP award, while Jolas was named finals MVP in the All-Filipino Cup.

Both part of the Philippine Centennial Team, Abarrientos and Lastimosa also won a bronze medal together for the country, with Alaska coach Tim Cone at the helm, in the 1998 Bangkok Asian Games. 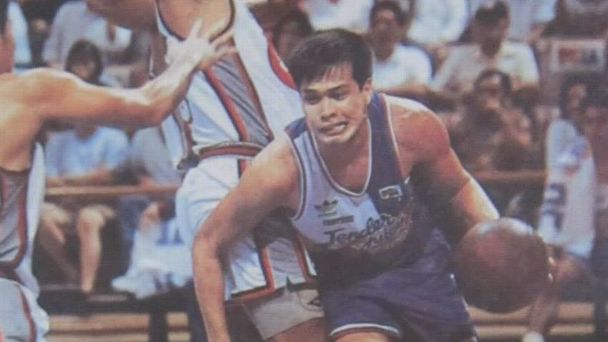 ESPN5.com's Carlo Pamintuan talks to a handful of PBA legends to ask them about their favorite and most difficult matchups during their time in the league.

The Fast and the Furious were arguably the best and most popular PBA backcourt pair. This beloved tandem wreaked havoc for 15 years and continued what Jaworski and Arnaiz started for Barangay Ginebra, earning six championships together for the franchise.

Caguioa and Helterbrand were an unstoppable force in the league, each winning an MVP plum, five Best Player of the Conference awards combined, and multiple Mythical team selections.

The Spark and the Helter Skelter took part in the Kings' magical 2016 Governors' Cup run that ended an eight-year title drought, which turned out to be their last one together as Helterbrand retired soon after. Caguioa, who remains a legendary figure for the Barangay, has won two more championships since.

Big Game James and the Scoring Apostle were integral pieces of the Purefoods franchise -- also known as Star, B-Meg, San Mig Coffee, Magnolia -- for many years. They captured seven championships together, including a Grand Slam in the 2011-2012 season.

The iconic duo started out differently. Yap, picked 2nd overall in 2004, immediately became the face of the team. Simon, left unsigned after the 2001 draft, entered the fold at the same time as Yap, but had to work his way up to get noticed.

Simon slowly established himself as one of the team's main gunners over the years, forming a great offensive tandem with Yap. The partnership unfortunately ended after a blockbuster trade sent Yap to Rain or Shine in exchange for Paul Lee in 2016.

Other features:
PBA imports who have won an NCAA title
NBA champions who played in the PBA

The Mighty Mouse and the Blur were partners in catapulting Talk 'N Text to its glory years in the early 2010s. They steered the franchise to five championships together including a rare Philippine Cup 3-peat milestone.

Alapag was drafted by TNT in 2003, and his heir apparent Castro joined the team five years later. They were named co-finals MVP twice in 2011, with Alapag taking home the league MVP honors by the end of the season. Castro went on to win BPC five times. Alapag's No. 3 jersey was retired by TNT in 2015.

They also rose to international stardom, serving as Gilas Pilipinas' main playmakers in the past decade. Alapag was a long-time Philippine team captain, known for his clutch shots, while Castro was considered the "Best Point Guard in Asia", earning two straight FIBA Asia mythical team selections.

The explosive pair of Alex Cabagnot and Chris Ross have won eight championships together for San Miguel, including five straight Philippine Cup crowns (and counting). They are vital contributors in the Beermen's recent dominance.

Both players have a penchant for showing up when the game is on the line. Whether it's a clutch shot or a key defensive stance, they have the ability to make the right plays at the right time. It's no coincidence that Cabagnot is known as the Crunch Man and Ross has two finals MVPs to his name.

Together with Marcio Lassiter, Arwind Santos, and June Mar Fajardo, they collectively make a strong case for the greatest PBA starting unit of all time.