The Babe Ruth of Japan, Shohei Ohtani, has asked all 30 MLB teams to answer a quiz about how they potentially will utilize him. The 23-year-old right-handed starter/outfielder will be the biggest signing of the offseason, but he can only sign for millions, not hundreds of millions or even tens of millions, because the Major League Baseball Players Association, in the most recent collective bargaining agreement, agreed to limit the earning ability of international players under 25.

With Ohtani expected to become a free agent Friday, we at ESPN, always in a helpful mood, offer some answers the New York Yankees could give to some of those potential quiz questions.

What do you think of my talent?

Ohtani in the spotlight 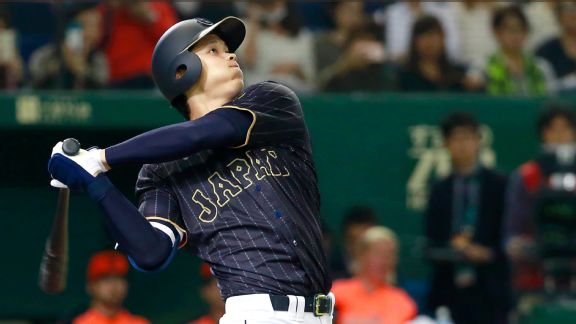 Japanese sensation Shohei Ohtani is heading to the majors. Where will the ace-slash-slugger land? As we await his arrival, here's what you need to know about the two-way superstar.

• Ohtani's role could be revolutionary Olney »

• MLB is gaining an ace, but can he hit in the majors? Insider »

Well, money talks, doesn’t it? We have been acquiring as much money as we can to give to you. In July, we gave up three of our best prospects to the Oakland A’s for a pitcher named Sonny Gray. We also received $1.5 million in international pool money. You know why? You, you and you! We're hoping you're essentially the player to be named later in that A’s deal.

We love stats in the Bronx, and one that sticks out for us is that you posted a better strikeout rate in your age-22 season than either our own Masahiro Tanaka or free agent Yu Darvish did in Japan.

You can be a No. 1 starter and a probably an above-average hitter. So what do we think of your talent? We think a lot of it.

Will you let me pitch and hit?

From what we heard about your thinking, it doesn’t sound like it'll be our choice anyway. Our GM, Brian Cashman, hasn’t tipped his hand, but we think you tipped it for him.

Our owner, Hal Steinbrenner, said he would've let Girardi go even if we'd won the World Series this season. That would have been something. (Even some of us in the front office doubt it, but he said it and he signs the checks.)

So what is the new manager like? Well, we don’t know yet. We are going through a process to find the next manager. It definitely should be done by June.

Whomever it is, don’t worry about it -- the plan, as we said above, is just to tell him how to use you.

My decision will not be based on money, so what else can you offer me?

Well, more money. And fame. We know these days the playing field for marketing is not as tilted toward New York as it once was, but really, where are you going to make more off the field -- in pinstripes or as a Ranger or Twin? Sorry, Arlington and Minneapolis, but come on. Maybe L.A. can compete, but the Dodgers have only a measly $300,000 to offer you.

How would I fit in your rotation?

When Girardi was our manager (and remember he is most definitely not our manager anymore) he was asked about having a six-man rotation all the time because, in theory, it would help your fellow countryman, Tanaka.

Girardi said he wouldn't do it because there wasn't enough room on the roster. With six starters and seven relievers, you'd be left with just three bench players. One is a backup catcher, which whittles it down to two. You see where we're going with this?

If we add you, we can lighten the load on our young guys, Luis Severino and Jordan Montgomery, while giving Gray a rest. If our old ace, CC Sabathia, re-signs, he could be helped by the extra time off too.

We bring you in and maybe we go to the old six-man, where you could play a little outfield and DH some. Perfect world!

Why do you think we would be successful?

We have a team that just came within a game of the World Series, and we might have the best farm system in baseball. So we have money, an unparalleled legacy of winning and the awesome diversity of New York City.

We've also had success with Tanaka in recent years, while the only Japanese-born play ever to slug over .500 in the majors is Hideki Matsui. Matsui won a World Series MVP award here, and liked being a Yankee so much he is still part of our organization as an adviser to Cashman.

Have you ever heard of Aaron Judge, Gary Sanchez or Greg Bird? The list goes on and on. We just made a long October run with a bunch of young players and, as we mentioned, we might have baseball’s best farm system, with guys such as Gleyber Torres, Clint Frazier and Albert Abreu. So we know how to develop players.

What is your player-performance philosophy?

Yankee Stadium might be the world’s most famous arena (sorry, Madison Square Garden, but it’s no contest). It speaks for itself, we think, but this October the place was really loud again. It had been criticized for being too corporate, but the fans brought it this fall. It feels like the start of a new dynasty here in the Bronx. We have a famously short porch in right field that would be ideal for a left-handed swing.

The Babe Ruth of Japan deserves to be in Babe Ruth’s old neighborhood.

What else do I need to know?