Some might call it a coincidence, but the bottom line is what matters: In an effort to turn around their defense, the Washington Redskins again turned to the University of Alabama. In the last two years, the Redskins have drafted four former Crimson Tide players, and two of them are expected to start along the defensive line.

The Tide routinely have one of college football’s top defenses. The Redskins haven’t been ranked better than 17th in either yards or points allowed per game since 2011. They were 27th in points and 21st in yards last season.

Last season in five games before a season-ending Lisfranc injury, Allen showed that he could be a solid player. He recorded one sack and consistently helped push the pocket and helped against the run out of the nickel front. Anderson was a backup who did not have much of an impact on the pass game. Payne was drafted to help Washington’s last-ranked run defense, which now must face the Cowboys' Ezekiel Elliott and the Giants' Saquon Barkley at least twice a year.

“He’s strong at the point. He’s very physical,” Nick Saban said of Payne. “He uses his hands well, controls blockers and he’s got really good initial quickness for his size. He did a much better job this past season as an interior pass-rusher. He has initial quickness and is athletic enough to finish on the quarterback. The key with him is don’t let him get too heavy so he can stay quick enough to be an every-down player.” 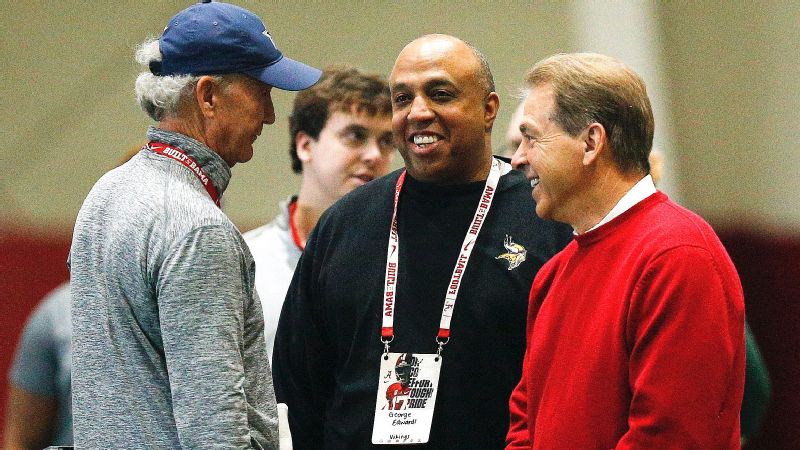 Why do the Redskins and other NFL teams target Alabama players so much? Part of it has to do with the access he gives their scouts, writes John Keim.

Payne went from 350 pounds -- or so -- in high school to 320 pounds last season to 311 at the NFL combine. Payne said last year he dropped the weight because of how fast the game was becoming. The coaches knew what he needed to address before last season.

“With him controlling weight, working on initial quickness, getting to be a better technical pass-rusher, moving his hands and using his feet at the same time,” Saban said. “He’s a driven guy, so he’ll do whatever you tell him to do, and he’ll work hard at it.”

Some analysts have suggested Payne could become a better pass-rusher in the NFL than he was at Alabama; he recorded a combined 2.5 sacks his last two seasons as a nose tackle. His impact there was felt most often in the playoffs. Saban agrees with those analysts' assessments, with a caveat.

“As long as you keep his weight down,” Saban said. “Bigger is not better with him. He’s big enough.”

Greg McElroy, an ESPN SEC Network analyst and former Alabama quarterback, said Payne should be an effective pass-rusher. The Redskins need for him to become one, as they wouldn't want a two-down player with such a high draft choice. Washington, though, clearly believes Payne can help on all three downs and, at 20, is still maturing as a player.

“Is that his best attribute prior to his final two games in college? I say no,” McElroy said. “But if you watch the last two games [vs. Clemson and Georgia] he was possessed. He’s athletic enough to push the pocket to create. He can be disruptive for sure. I thought he was a top-10 pick. He’s a better run-stopper than a pass-rusher, but in that division, that’s as important, if not more so.”

The Redskins aligned Payne as the nose tackle in their base front during the OTA session last week that was open to the media, with Allen to his right. Payne also played tackle in the nickel package.

“I’m not sure he can slide in and out like Allen,” McElroy said. “[Payne is] definitely more one-dimensional as a pass-rusher, but that doesn’t mean he can’t be really effective. Allen can line up over center, over guard. You can put him anywhere. Daron is not quite the same when it comes to being a Swiss army knife up front, but he can push it and get to the backfield.”

As for Hamilton, he suffered injuries to his right knee each of the past two years -- a broken kneecap (2017) and a torn ACL (2016). The Redskins have their starters inside with Mason Foster and Zach Brown, so if Hamilton makes the roster, it would be for depth and special teams. At 6 feet and 228 pounds, Hamilton is considered small. Foster and Brown, for example, are both an inch taller, but weigh around 250.

So Hamilton will have to prove his other skills can overcome any size deficiencies. Hamilton, who was a high school valedictorian, relayed signals in the huddle for Saban at Alabama. Hamilton also knew where his teammates must align. And, Saban said, his ability to read keys and diagnose plays helped him flourish -- and allowed Hamilton to reach the point of attack faster than his opponent.

“He is really, really smart and makes everyone around him play better,” Saban said. “Very, very instinctive. He plays with good power for his size because he’s not a great big guy, but he can strike out of his hips and has some power. His greatest asset is he has really good in-line quickness and is very instinctive. He’s about as smart a player as you can find.”