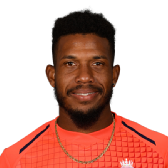 Player Of The Match

9pm So, Brave leap up the table after two in two. London Spirit are still winless, and rather in need of inspiration. From Miller, Alan and Chandan, and Matt at Lord's, good night!

8.53pm Well crumbs, that was a ridiculous game! Adam Rossington crunched the most productive Powerplay of the tournament so far, but Spirit's middle order proved to be fiftingly ethereal, and were muscled off the game by some brilliant death and late-middle bowling, from Jordan, Garton and Mills in particular.

James Vince: "We were under pressure, Garts came back but they had a reasonably long tail, Tymal and CJ outstanding at the end. Hard to know what a good score is, but a short boundary... we had a chance. We fought our way back into the game. We have our plans pre-game but it comes down to reacting to what the pitch is doing. Great to get two wins on the board after a slow start. Haven't played a perfect game by any stretch."

Chris Jordan: "That's what makes this format so fun, we didn't start as we would have liked to, but showed the character in the team. You just want to help your team out as much as possible. We knew we were tight on time, but had to find a balance, I said I needed at least seven or eight to defend. Not easy with extra men inside the circle."

19.5
0
Jordan to Mohammad Amir, no run, round the wicket, full and straight, thumps the pad, Brave win a thriller! Outstanding from Jordan at the death, held his nerve, demanding the errors from Spirit, and Brave sneak over the line by four runs!

Six or bust... Mo Amir for the win? Third man is fine, sweeper on the off side

Van der Merwe thought he was out, actually it was Cullen, but matters not, as he's not on strike!

19.4
W
Jordan to Cullen, OUT, brilliant from Jordan, brilliant from de Kock! Another yorker, fired past the toes, makes room to leg and misses with the hack, de Kock gathers, and pings the shy without the batter in the frame!

19.3
1
Jordan to van der Merwe, 1 run, full and straight, targetting leg stump, dug out into the covers, but it's just the single
19.2
4
Jordan to van der Merwe, FOUR, slower ball, but Roelof picks it with violence! Waiting, waiting, waiting, then battering eagerly as the ball finally got to him on the back foot, high over extra cover!
19.1
1
Jordan to Cullen, 1 run, very full, struck on the pad, Jordan wants the lbw, but that's got to be outside the line... they rush the deflection to point

Now it's Jordan, with 11 to defend. And a new man in his sights. Mind you, Cullen has levers as he showed on Thursday!

Vinod Rajpal: "this is going from an one-sided chase to a last ball thriller !!"

Rohit Verma: "No boundaries at all yet from any batsmen other than the openers!!"

18.5
W
Mills to Mohammad Nabi, OUT, slapped straight at extra cover! Mills strikes brilliantly, another slower ball, demanding that Nabi put his own muscle through the stroke if he wanted the sweet release of the boundary! He gambled, he failed, and now it's game on!