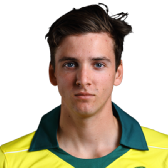 Western Australia's new ball bowlers Jhye Richardson and JasonBehrendorff excelled as their side strolled to a nine-wicket win after dismissing NSW for 76, their lowest-ever one-day score.

WA cruised to a bonus point victory at the WACA on Saturday, reaching their modest target with a whopping 33 overs remaining in a rematch of last year's final.

They moved to within a point of early pacesetters Tasmania, who secured a bonus point in each of their victories so far. NSW, who were dismissed in 21.4 overs, have lost both of their games and along with Queensland have yet to register a point.

Richardson returned personal career-best one-day figures of 4 for 24 off eight overs, while Behrendorff took 3 for 17 off seven.

Blues captain Kurtis Patterson opted to bat first in Perth but must have been ruing his decision after NSW slumped to 6 for 20 in the ninth over.

A promising seventh-wicket stand of 38 between Australian short-form representatives Daniel Sams (26 off 31 balls) and Sean Abbott (12 off 20) spared NSW from total embarrassment and added a little flesh to their skinny score.

However, the last four wickets added just 18, leaving NSW 16 runs shy of their previous lowest one-day score of 92 back in 1972-73. It was the equal seventh lowest total in Australian one-day domestic history.

Liam Hatcher, the least experienced of the Blues pace quartet, was rewarded with a wicket with his first delivery, as he pitched the ball up and bowled Short.

Philippe, who scored a century in the win over Victoria, and Sam Whiteman (14 not out off 18), eased WA to victory after just 17 overs.

Earlier, Australian representatives Richardson and Behrendorff troubled all the batters with swing on a spicy wicket. The innings hit the skids when NSW lost 3 for 0 in 10 balls. The carnage started in the third over with Patterson (4) and Matthew Gilkes(0) bowled by Richardson in a double-wicket maiden.

Behrendorff chimed in, claiming a wicket in three successive overs. He had Daniel Hughes (0) caught in the covers and bowled Moises Henriques (1) and Jack Edwards (3), while Richardson had Jason Sangha (0) caught off a pull shot.

Twelve of the Blues first 20 runs came from extras. Sams struck four boundaries and looked good until flashing at a Matthew Kelly delivery and being caught behind.

The two teams square off again in a Sheffield Shield match starting at the WACA on Monday.