After the Indiana Pacers play the Los Angeles Lakers on Monday at Crypto.com Arena and continue on the road to Sacramento, center Myles Turner might have mixed feelings about boarding the team plane instead of staying in L.A.

Last month, after trade talks between the Pacers and Lakers fizzled just before training camp, Turner took the rare tactic of publicly lobbying for the teams to revisit the deal.

"If I'm the Lakers, I take a very hard look at this with the position that you're in," Turner said, responding to a question about the potential swap as a guest on ESPN's "The Woj Pod" with Adrian Wojnarowski. "I know what I can provide for a team -- my leadership, my shot-blocking, my 3-point ability and just my ability to make plays out there on the floor."

The Lakers decided that giving up both their 2027 and 2029 first-round picks -- the only future first-round assets they have in their draft chest -- was too steep a price to pay for a haul that wouldn't indisputably propel them to contender status, sources said.

Plus the Lakers reasoned, sources said, the same deal with the Pacers would still be there down the line should they reengage.

With the Lakers and Pacers meeting on Monday, here are five questions to answer as L.A. considers whether to deal or not to deal.

When could this trade happen?

When the Lakers started the season 0-5, Wojnarowski reported L.A. would wait until around Thanksgiving before looking to upgrade the team. The thinking behind that timing, team sources said, was threefold. Lakers vice president of basketball operations and general manager Rob Pelinka wanted to see how the group that was assembled in the offseason, featuring six players from last season's team, looked together; he wanted to give first-year head coach Darvin Ham the chance to bring his vision for reinvigorating Westbrook to life; and he didn't want to come off as desperate with early-season trade talk, knowing other teams would take advantage in any potential negotiations.

Where things stand now is an adjusted timeline for L.A. The Lakers expect more teams will be willing to engage them in trade talks after Dec. 15, when contracts that were signed in the summer are eligible to be moved, sources said. But even with more possibilities opening up, league business slows around the holidays, so the odds of any action before mid-January are remote.

Of course, the deeper into the season it gets with the Pacers still looking like a playoff lock in the Eastern Conference, the more Indiana's stance on unloading current talent for future flexibility could change. The Pacers' owner, real estate mogul Herb Simon, is 88 years old. While most league governors value chasing championships above all else and prefer rebuilds over mediocrity, the Lakers aren't convinced Simon would dismantle a winning team to tank for the No. 1 draft prospect in Victor Wembanyama, sources said, preferring to enjoy a competitive group in his autumn years.

What would Turner and Hield bring to the table?

Their wide-open 3-point percentage, defined as a shot taken when the closest defender is at least 6 feet away at the time of release, is historically bad -- if their 31.9% mark on wide-open 3s sticks, it would be the worst rate of any team in any season since player tracking began in 2013-14.

Adding Hield could go a long way to fixing that. He's sixth in the league in 3-pointers made per game (3.8). He's also second in made catch-and-shoot 3s per game, behind only Klay Thompson, and ranks in the top five in accuracy on wide-open 3s.

Hield could allow the Lakers to get more out of LeBron James, who has assisted on the most 3s in NBA history. His Lakers teammates this season are shooting 22.9% on wide-open 3s off his passes, which is the worst percentage for any passer who has created at least 40 wide-open 3 opportunities this season, according to Second Spectrum.

The Lakers' defense has allowed opponents to shoot 68% at the rim in November, seventh worst in the league this month. Turner can help there, too. The 26-year-old is averaging 2.8 blocks per game, a category he has led the league in twice in his eight seasons.

And he would allow Anthony Davis to continue playing inside, where he prefers, with his range from deep.

Is Westbrook still a problem for L.A.?

Not necessarily, but his contract is. The Lakers don't have enough reliable players and turning Westbrook's $47.1 million contract into two rotation players gets them closer to the depth needed for a postseason run. 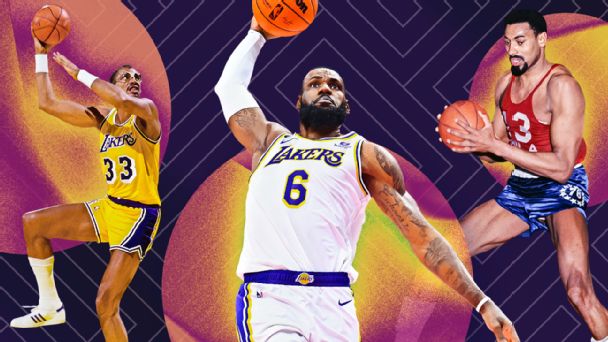 LeBron James is on track to pass Kareem Abdul-Jabbar as the NBA's all-time leader in regular-season points this season. We'll have complete coverage all year long.

Westbrook's 15.7 points and 8.1 assists per game as a reserve have been a rare bright spot in the Lakers' season. After struggling so much last year, he has found a rhythm as the leader of the second unit.

Some of Westbrook's decision-making has been second guessed -- notably by Davis following a loss to the Kings on Nov. 11 that dropped the Lakers to 2-10. "Couple 'my bads' at the end of the first half, and they go on a 14-5 run," Davis said, referring to a rough stretch by the point guard when L.A. lost momentum going into halftime. "Certain moments where we can't have 'my bads.'" Westbrook is also shooting a career-worst 39.4% from the field and has the seventh-worst turnover rate in the league, while playing the fewest minutes of anyone in the bottom 10.

Ham, who adjusted Westbrook's role from starter to sixth man just five games into the season, has continuously championed the 15-year veteran since the change.

"I love what he's bringing, coming off with that second unit and giving us a boost when needed," Ham said when asked, after James suffered a groin injury earlier this month, if Westbrook would return to the starting lineup. "Just him being able to orchestrate and be Russ. Dominate the ball, dominate the pace and play free."

But if the Lakers intend to upgrade the roster this season around James to give the 20-year veteran his best chance at another championship run, as Pelinka said was his goal over the summer as the "caretaker of LeBron's legacy," then it would simply have to involve Westbrook's contract.

So what concerns remain?

Showtime Lakers! LeBron to Russ back to LeBron for the slam

LeBron James gets the loose ball, feeds Russell Westbrook, who gives it back to LeBron for the dunk.

There are other questions the Lakers' front office considered when evaluating the trade before training camp, sources said, that left L.A. reluctant to go all-in. Questions such as:

Would either Turner or Hield be clear-cut members of L.A.'s closing lineup in a playoff game?

Would Turner be able to stay on the court if the opponent went small?

Would Hield bring enough defensively, or would Ham trust in a wing like Austin Reaves or Troy Brown Jr. more in that spot?

And, recalling the franchise's trades for free-agent-to-be Dwight Howard in 2012 and Dennis Schroder in 2020, is it worth risking what could be valuable future draft capital to acquire Turner for what could amount to only a few months in Los Angeles if he walks the way Howard and Schroder did?

Would the Lakers' season be saved by a trade?

Maybe. There is belief shared by leaders in the Lakers' locker room, sources said, that the team is only a couple of players away from turning this group into a legitimate contender. But acquiring the right players could take multiple trades.

Get access to exclusive original series, premium articles from our NBA insiders, the full 30 for 30 library and more. Sign up now to unlock everything ESPN+ has to offer.

Which is why attaching both 2027 and 2029 draft picks to get a deal done with Indiana is such a gut check. Pelinka admitted as much on media day in September. "You have one shot to make a trade with multiple picks," he said. "So if you make that trade, and I'm not talking about one particular player on our team, but it has to be the right one."

Otherwise, maybe there is a way to seek one deal centered on Westbrook and one of the two picks, and another using something like Patrick Beverley's salary ($13 million) and Kendrick Nunn's ($5.3 million) -- the only other contracts on the Lakers' books hefty enough to pair together to salary match for a proven player -- plus the other pick to add another player of consequence.

But the clock is ticking. Even with improved play as of late, at 7-11 L.A. is still three games out of the final play-in spot in the Western Conference.

And the schedule is unforgiving leading up to the mid-January timeline when L.A. anticipates offers could materialize. Including Monday's game against the Pacers, 15 of the Lakers' next 23 games between now and Jan. 9 are on the road. If at that point, nearly 40 games into the season, the Lakers are still below .500 -- a reasonable concern considering L.A. is 2-6 on the road so far -- would leveraging the future to pour into this group be worth it?

Or should the Lakers play this season out with the roster as currently constructed, use salary-cap space to sign free agents in the summer and explore trades involving picks after draft night when they will have the player they selected with their 2023 first-round pick available to deal?

For now in Lakerland, there remain far more questions than answers.