One of the most prolific careers in NFL history has come to an end, as New Orleans Saints quarterback Drew Brees announced Sunday on Instagram he has decided to retire after 20 seasons.

Brees' four children, Baylen, Bowen, Callen and Rylen, announced in a video: "After 15 years with the Saints and 20 years in the NFL, our dad is finally gonna retire. So he can spend more time with us! Yeah!!"

Drew Brees lets his kids announce his retirement from the NFL

Drew Brees, with the help of his kids, officially announces his retirement from the NFL.

Brees added a message to the post that read:

"After 20 years as a player in the NFL and 15 years as a Saint, it is time I retire from the game of football. Each day, I poured my heart & soul into being your Quarterback. Til the very end, I exhausted myself to give everything I had to the Saints organization, my team, and the great city of New Orleans. We shared some amazing moments together, many of which are emblazoned in our hearts and minds and will forever be a part of us.

"You have molded me, strengthened me, inspired me, and given me a lifetime of memories. My goal for the last 15 years was striving to give to you everything you had given to me and more. I am only retiring from playing football, I am not retiring from New Orleans. This is not goodbye, rather a new beginning. Now my real life's work begins!"

Brees, 42, retires as the NFL's all-time leader in career passing yards (80,358) and ranks second all time in touchdown passes (571) and completion percentage (67.7%). More than that, though, Brees will always be revered for helping to revive the Saints franchise and the city of New Orleans in the wake of Hurricane Katrina when he and coach Sean Payton arrived together in 2006.

They led the Saints to the NFC Championship Game in that first year and won the only Super Bowl in franchise history three years later, with Brees being named the game's MVP.

"When I was hired by the Saints as head coach in 2006, the very first goal was to establish a functional and winning culture," Payton said in a statement. "In doing so, it was vital to know what we were looking for in a player, talent, work ethic, makeup, intelligence and leadership are all qualities we found in Drew Brees. ... I am forever grateful for what he has done for our team, our community and for me personally."

Brees never got back to a second Super Bowl despite leading the Saints to four straight NFC South titles over the past four years. His final game was a disappointing 30-20 loss to Tom Brady and the Tampa Bay Buccaneers in the divisional round of the playoffs -- the first time Brees ever threw three interceptions in a playoff game. 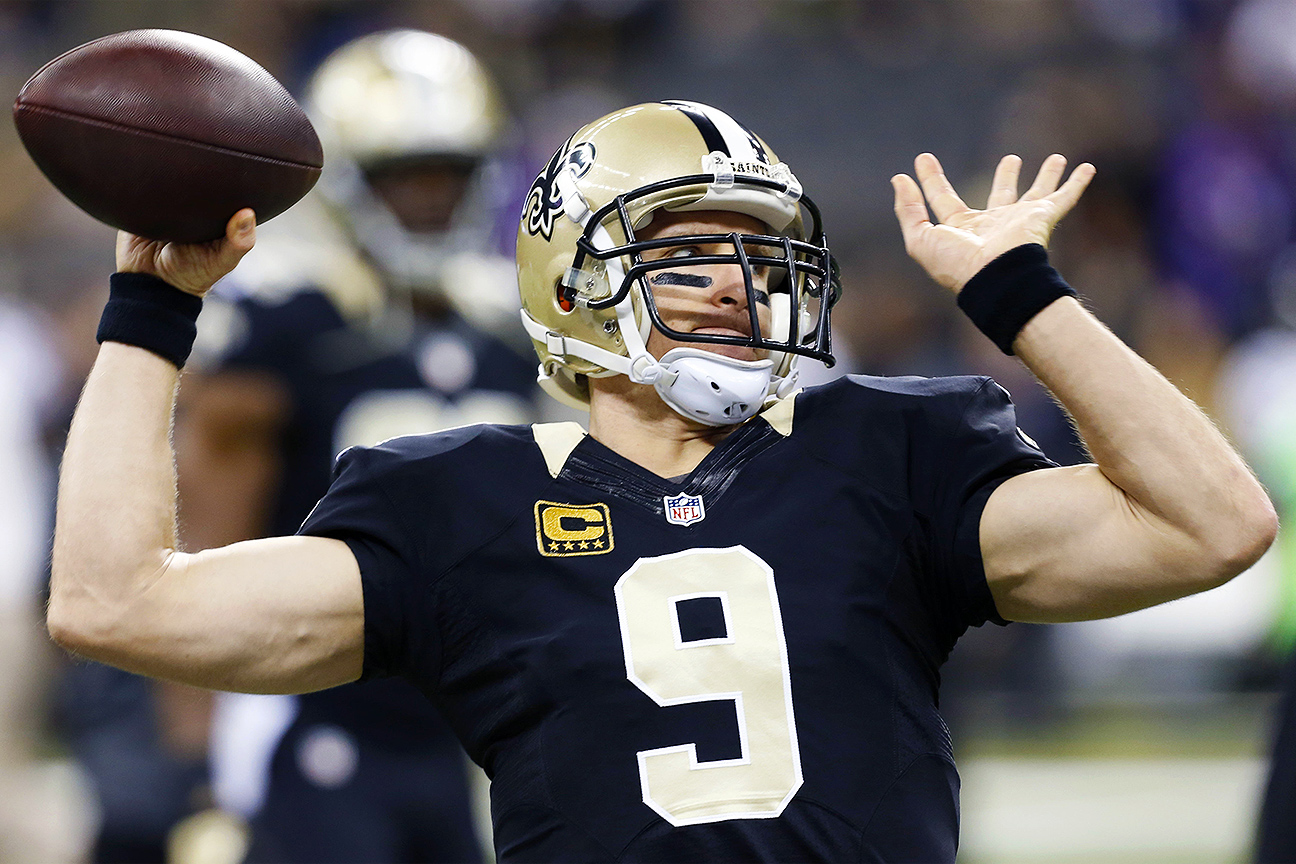 • Most consecutive games with a passing TD (54)

His decision to retire leaves an enormous void for the Saints to fill with either Taysom Hill, Jameis Winston or a quarterback to be named later.

Brees' legacy has long been secured as one of the game's all-time greats.

On top of all the gaudy numbers and historic accomplishments, Brees also will be remembered as a great underdog story. At just 6 feet tall, Brees was recruited by only two colleges before a record-breaking career at Purdue. He fell to the second round of the draft in 2001, where he began his career with the San Diego Chargers.

In his final game with the Chargers in 2005, Brees suffered a devastating shoulder injury -- a 360-degree labrum tear and some rotator cuff damage, which required 12 anchors to repair. Renowned surgeon James Andrews later said Brees' recovery was the most remarkable of any athlete he ever treated, and Brees was back on the field with the Saints in Week 1 of that unforgettable 2006 season.

"Drew is so much more valuable than all the records, awards and accolades that he amassed through a 15-year career with the New Orleans Saints and 20-year NFL playing career, one of the greatest in our league's history," Saints owner Gayle Benson said in a statement. "When Drew first joined the Saints in 2006, my late husband Tom was determined to deliver a team to New Orleans that would win a championship on the field and become a leader in the community following the setbacks that Hurricane Katrina dealt our region. Over and above his outstanding performance, Drew came to represent the resolve, passion and drive that resonates not only with Saints fans and football fans, but our entire community."

Brees finished his career with a record of 172-114 as a starting quarterback in the regular season and 9-9 in the postseason. He was 142-86 and 9-8 in 15 years with the Saints, with whom his partnership with Payton produced some of the most spectacular offensive teams the game has ever seen.

Brees threw for more than 5,000 yards in a season five different times; no other quarterback has done it more than once. He holds the top three single-season completion percentages in NFL history and six of the top nine.

Brees has ranked among the NFL's top 10 passers in ESPN's Total QBR metric in all 15 seasons since it was created in 2006; it's a streak six years longer than that of any other quarterback during that span.

Brees has long said he believed he could play at a high level until the age of 45 -- as long as he wanted to keep playing. But starting in 2017, he also said he started taking each season one year at a time -- treating each like it could be his last -- and that he would take some time after each season to reflect with wife, Brittany, and their kids about whether he wanted to keep playing.

Brees had already lined up his "next chapter" last year, when he agreed to become an analyst for NBC after his playing days were over.

He officially confirmed those plans during his first interview with NBC's "Today" show on Monday morning.

"You don't just wake up one day and say, 'Hey, I'm gonna retire,'" Brees told "Today," confirming that he went into this past season thinking it would be his last. "It's definitely a process. And listen, I'm 42 years old, I've had a chance to play this game for 20 years in the NFL. And I think for the last few years I've felt like this moment was coming. And it just made me so laser-focused on staying in the moment each and every day, enjoying the moment ... and knowing that I gave it my absolute best."

Brees also expressed his gratitude to several people in a detailed letter to The New Orleans Times-Picayune/New Orleans Advocate on Monday morning that was nearly 1,800 words long.

He separately thanked the city of New Orleans and "The Who Dat Nation"; the Saints organization, owner Gayle Benson and late owner Tom Benson; his coaches and teammates, including Payton and general manager Mickey Loomis; the training staff, equipment staff and all the "unsung heroes"; his mentors Tom House and Todd Durkin; his parents, family, friends, neighbors and the "village" that it takes to raise a man; his wife and their four children; and all the "young dreamers."

"Words cannot express the love and appreciation I have for you," Brees told the city and the fan base at the beginning of his letter. "From the moment I stepped foot into the city of New Orleans, I could feel your spirit. You told me that if I loved New Orleans, you would love me back. No truer words have ever been spoken."

After missing just one game due to injury in his first 18 seasons, Brees dealt with some significant injuries late in his career. In 2019, he missed five games after tearing a ligament in his thumb. In 2020, he missed four games after suffering a punctured lung and 11 broken ribs.

By retiring now, Brees is clearing the path for fellow 40-something Brady to finish ahead of him in their two most prominent races in the NFL record book. Brady has 10 more career TD passes than Brees and needs 1,155 passing yards to surpass Brees.

Brees also leaves behind a sizable salary-cap hit of $22.65 million that the Saints must account for over the next two years because of the way they chose to structure his past contracts. However, they already reduced his salary from $25 million to the veterans minimum of $1.075 million this year so that they can wait until after June 1 to officially process his retirement. As a result, they can push $11.5 million of his remaining cap costs into 2022.

Brees will count $12.225 million against this year's cap through June 1. Then his 2021 cap charge will drop to $11.15 million after his retirement becomes official.

That's a big deal for the Saints, who were more affected by the NFL's reduced salary cap than maybe any team in the NFL this year. They began the offseason nearly $100 million over the cap, before reducing Brees' salary and releasing veterans Emmanuel Sanders, Janoris Jenkins, Kwon Alexander and Thomas Morstead, among others.

The Saints also restructured Hill's contract to create cap room. Hill received a four-year, $140 million contract extension -- but all years are voidable, and it's a mechanism to free up cap space this year, a source told ESPN's Adam Schefter. It saves the Saints more than $7.5 million against the cap this year, and his contract numbers this year include a $9.686 million signing bonus, a $1.439 million guaranteed roster bonus and a $1.034 million guaranteed base salary plus incentives.

Contract restructures that include voided years are common, but the salaries on voided years aren't usually reported -- and sometimes they're heavily inflated. If those voided salaries are too low, it can affect the rule on renegotiating deals within 12 months.

On a positive note, Brees is leaving the Saints in decent shape as far as backup options.

Hill, who is under contract through 2021, remains unproven as a 30-year-old dual-threat quarterback with limited experience. However, he did go 3-1 as a starter in place of Brees this season with four TD passes, four TD runs, two interceptions and three lost fumbles in that four-game stretch.

Winston, meanwhile, is an unsigned free agent. But he chose to come to New Orleans last summer on a minimal contract so that he would have the chance to learn under Payton and Brees and possibly revive his career as Brees' successor. And Payton recently made it clear that the Saints want to re-sign Winston, 27, and allow him to compete for the starting job. The two sides are working on getting a deal done, sources told ESPN's Dianna Russini.

Although Payton chose Hill as Brees' replacement in the short term in 2020, the coach has insisted that the team is high on Winston's potential. And Payton has repeatedly insisted he believes "our next quarterback's in the building" -- whether that be Hill or Winston.