By virtue of her historic gold medal victory in women's 55kg weightlifting in the Tokyo Olympics, Hidilyn Diaz will undoubtedly receive a hero's welcome on Wednesday.

Diaz claimed the Philippines' first-ever gold in the Games after besting Chinese rival Liao Qiuyun, and setting two records while at it. She will not be celebrating for long in Tokyo, however, as protocols state that athletes, coaches, and officials are required to leave Japan within 48 hours from completion of their events or tasks. 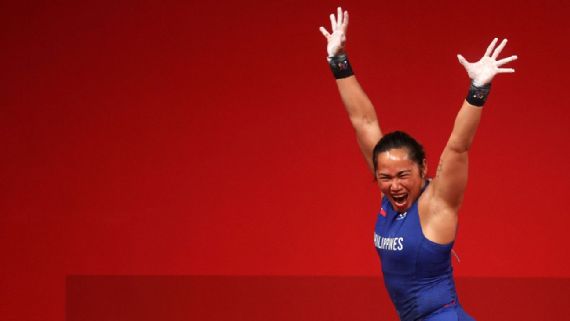 "It's mandatory," stated Philippine Olympic Committee (POC) Pres. Abraham "Bambol" Tolentino, also adding that the Filipino golden girl will be aboard a Philippine Airlines flight in her return to Manila. "But more important is that Hidilyn wants to be with her family, whom she hasn't seen for more than one and a half years now."

Diaz had been away from home for almost two years as she sacrificed her family time for unimpeded training Malaysia, where she was also forced to stay for even longer due to the pandemic. All that, however, has definitely paid off - figuratively and literally.

Based on the latest count, she will be raking in a guaranteed P40.5M in cash - a number that may balloon to as much as P50M, according to Tolentino.

• P10M courtesy of Republic Act No. 10699, or the National Athletes and Coaches Benefits and Incentives Act, signed in 2015 by the late Pres. Benigno S. Aquino, III,

• P2.5M courtesy of Diaz's hometown Zamboanga City which recently passed an ordinance for the said amount for gold medalists, P1M for silver, and P500K for bronze (only Diaz and Eumir Marcial, both Zamboanguenos, are eligible for this reward)

The 30-year-old will also be awarded an Olympic Gold Medal of Valor by the Philippine Sports Commission (PSC), while Team HD (Hidilyn Diaz) will get a law-mandated P5M. This will be equally divided among Chinese coach Gao Kaiwen, strength and conditioning coach Julius Naranjo, sports psychologist Karen Trinidad, RPm, RPh, PhD., and nutritionist Jeaneth Aro.

Aside from cash, Diaz will now add three prime locations as her addresses.

• A house in lot in Tagaytay City, Cavite, to go along with a Foton Automobile, as pledged by Tolentino,

• A condo unit worth P14M in Eastwood City, Libis, Quezon City, as pledged by Megaworld, and

• A condo unit worth P4M in any PHirst Park Homes communities in Luzon, as pledged by Century Properties and Mitsubishi Corp.

That's not all. The first Filipino Olympic gold medalist has also been given lifetime free flights by Air Asia as well as lifetime free fuel by Phoenix Petroleum.

Now that, is a windfall of winnings.