All you needed to know about how the Los Angeles Angels value Shohei Ohtani's bat was evident in where he hit in his first game back: the No. 3 spot, directly behind Mike Trout, against a lefty.

Ohtani's return -- 0-for-4 with a walk, two strikeouts and a run-scoring groundout in a 5-2 victory over the Detroit Tigers -- was uneventful. But the important thing is that it happened. And now we have him back in our lives for the rest of this summer, even if it's only half of him.

Ohtani is still partly recovering from the Tommy John surgery he underwent in October, a procedure that will keep him away from pitching until 2020. But his power and his strike-zone awareness -- not to mention his speed -- are just as prolific as his splitter and his fastball.

Ohtani coupled a .925 OPS with a 3.31 ERA on his way to being voted the American League Rookie of the Year last season. His left-handed bat should jolt an Angels lineup that had been averaging a mere 4.7 runs per game, despite employing baseball's greatest position player.

Ohtani's return also sparks some fascinating questions, starting with these three big ones.

How will Ohtani impact Trout?

When play began Tuesday, Trout led the majors with 31 walks and led the league with seven intentional walks, putting him on pace for 148 walks (a mark topped by only Barry Bonds this century) and 33 intentional walks (the most since Albert Pujols in 2010). With Pujols past his prime and Justin Upton recovering from turf toe, the men entrusted with protecting Trout in the batting order have been Brian Goodwin (a .250 career hitter through 452 at-bats heading into this season), Justin Bour (a .169 hitter in 2019) and Andrelton Simmons (63 home runs in 961 career games).

That is a long way of saying Trout is probably really happy to see Ohtani back. How much it actually helps him could tell us something about the overall importance of lineup protection.

Trout was seeing 47.9 percent of pitches within the strike zone at the start of this week -- relatively low but not a major departure from rates of prior seasons. The guess here is that pitchers won't really change the way they attack Trout simply because Ohtani looms in the on-deck circle. But the intentional walks should decrease, and the Angels should benefit more from Trout's major-league-leading .475 on-base percentage. Trout has come around to score a career-low 31.8 percent of the time he has been on base this season, according to ESPN Stats & Information.

What will become of Pujols?

The Angels have made it clear that Ohtani will be a regular presence in their lineup. He might not be in it every day, but he will be in it whenever he can. He won't be restricted to starting only against right-handers, as evidenced by Tuesday's start against Tigers lefty Daniel Norris. That puts Pujols and Bour into what is either a platoon or a timeshare at first base. Just as significantly, it means Pujols will usually be in the lineup only if he plays the field. 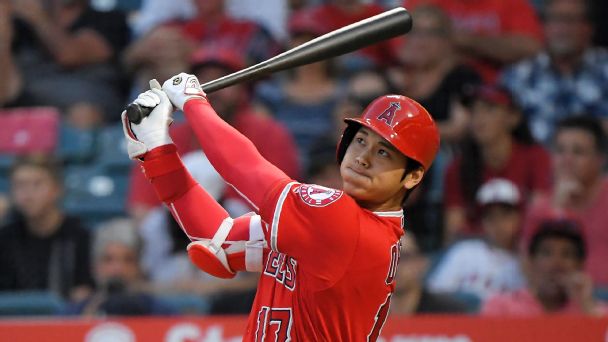 What can fantasy owners expect from Shohei Ohtani in 2019? Eric Karabell (ESPN+)

Pujols, 39, made a combined 34 starts at first base from 2016 to 2017. With Ohtani on the roster last year, he made 70 starts there in the first five months, then spent September recovering from another knee surgery. He is a .240/.288/.397 hitter the past three years, but he has a massive contract that will last through the 2021 season.

Angels general manager Billy Eppler told reporters that Pujols, who has batted two or three spots behind Trout this season, has been "the consummate professional" through the process, but this is when managing an aging superstar begins to get tricky.

How good a hitter is Ohtani, really?

Over the last two months of the 2018 season, when he was no longer pitching, Ohtani produced a 1.042 OPS, fifth in the major leagues. His OPS against lefties went from .500 before August to .831 after July 31. We already knew Ohtani was good at making adjustments -- he swapped his high leg kick for a subtle toe-tap days before the start of his rookie season -- and now we'll see how good he can be when unencumbered by a task that hadn't been attempted in nearly 100 years.

In theory, Ohtani should be better if he doesn't have to worry about pitching. He also should benefit greatly from having a full season under his belt, which he believes could "help me in every single way." But perhaps there is something to be said about how shifting the focus from hitting to pitching helped keep the inevitable slumps from prolonging because it gave him something else to focus on. Some of the Japanese media members who have covered Ohtani for a while have made that point.

This season will mark the first time Ohtani is anything but a two-way player, and that, in a weird way, will be an adjustment for him.