Editor's note: With the No. 22 sweater rising to the rafters in Boston on Tuesday, Jan. 18, two Black NHL teammates reflect on Willie O'Ree's lasting impact.

In this game, there are a few honors that separate the memorable from the unforgettable.

There's the Stanley Cup; the ultimate recognition for a team.

There's the Hockey Hall of Fame; the ultimate recognition for a career in our sport.

And there are jersey retirements; the ultimate recognition of what a player means to a franchise, a fan base, and a community on and off the ice.

In our opinion, getting your jersey retired is probably the biggest honor a player can receive. It forms an unbreakable bond between your jersey and every NHL home game your team will ever play. And it's an honor Willie O'Ree will receive next week, when his jersey is raised to the rafters in TD Garden.

Seeing the NHL's first Black player honored in this way is a chance for the hockey community to reflect on everything attached to being "the first," from the obstacles Willie faced to the hope he inspired in so many people who had never seen themselves represented on hockey's biggest stage.

The obstacles are where we need to start. Because we need to remember how enormous they were.

If you've heard Willie talk about his response to the racial slurs he heard on the ice -- how he didn't let it bother him, how he "just wanted to be a hockey player, and if they couldn't accept that fact, that was their problem, not mine" -- you've only heard part of the story. He's speaking to an incredible resilience that enabled him to keep going.

But let's think, for a moment, about what this resilience really meant.

It meant years of hearing people in and around rinks say that he was unwanted and unwelcome. It meant using their ignorance as fuel to defy stereotypes, while trying not to burn out from frustration over the fact that these stereotypes exist. And it meant carrying the weight of social stress and pressure on top of the daily training, focus and commitment it takes to be an elite athlete. That extra weight made every step of Willie's journey more demanding than the steps taken by white players as everyone worked toward their dream of playing in the NHL.

And yet, Willie persevered.

We can never understand what Willie went through in an era when explicit racism was common. But we can connect some of our experiences to the same forces Willie had to deal with, even though those forces now operate in more indirect ways.

Youth hockey gave us some of our first examples. Although we played in different parts of the world -- Canada and France -- our memories are similar: Seeing kids who didn't look like us talking on the side or behind our back. Hearing those kids' parents describe us with narrow-minded assumptions such as "Well, it's normal he's fast." Hearing other parents question why Black kids were getting ice time over the kids they thought belonged there.

In response, we turned to our own parents for support. They explained that these moments were unfortunately going to happen, because society hasn't reached a point where everyone is treated equally. And they reminded us to work hard and prove the doubters wrong. Their words prepared us for what to expect and gave us the motivation to keep going. But on the really hard days, when we needed extra motivation, we knew we could find it in the Black players who had already made it to the NHL. We could look to them as role models. We had proof that people like us could be recognized and valued for their contributions at the highest level of professional hockey.

More from The Undefeated 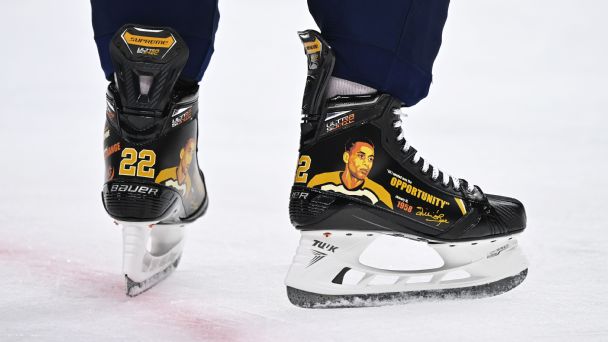 • Bell: O'Ree's short but pathbreaking stint with the Bruins
• Walker: The players and circumstances that paved the way for O'Ree
• Yates: O'Ree broke color barrier, but there's more work to be done

Willie didn't have that proof. All he had was his own dedication and mental strength to push forward, without knowing when or if his dream of making the NHL would become possible.

Somehow, he never wavered. And that's why he was ready for his historic call-up to the Boston Bruins.

It's worth considering how Willie's NHL debut was experienced by fans in the stands. Imagine a nearly all-white crowd watching him play in the Bruins sweater. They lived in a time when it was normal to claim Black people couldn't play competitive hockey because their ankles were "too weak" to skate. But right there, on NHL ice, was Willie O'Ree -- competing against the best in the old Montreal Forum. His presence must have forced people in the crowd to reevaluate their assumptions. Silently and slowly, it had to spark some change in their thinking about race and society.

Willie was probably aware of this, but we bet he wasn't focused on it. He probably just wanted to represent the Bruins well and help the team win. And that's part of the beauty of his impact. He wasn't playing hockey to try to change anybody's mind. All he wanted to do was be himself and play a sport he loved to the best of his ability. Meanwhile, by holding his own on the ice, he helped everyone who looks like him get a little more respect.

This is the story the hockey community needs to tell when we talk about Willie's 45 games in the NHL.

People sometimes use that statistic -- 45 games -- to downplay Willie's legacy and claim he doesn't deserve to have his jersey retired.

The thing is, when they stop counting at 45, they're missing the point.

Forty-five is just the base.

Add the number of games that every Black player has ever played in the NHL. The careers of Tony McKegney and Grant Fuhr and Jarome Iginla and P.K. Subban. We can go through the whole list. And yes, add all the games played by Pierre-Edouard Bellemare and Mathieu Joseph.

Without Willie, who knows whether any of us would be here?

This season will include 103 exclusive regular-season games across ESPN, ESPN+, Hulu and ABC, and more than 1,000 out-of-market games will be available on ESPN+.
• How to watch
• Subscribe to ESPN+
• Stream the NHL on ESPN

So, this should be pretty straightforward: The true measure of Willie's legacy isn't just the number of NHL games he played but the door he opened for every diverse player who came after. He could've played one game, in our opinion, and his legacy would still be huge.

On top of that, Willie's legacy includes the 130,000 kids he has reached through Hockey is for Everyone programs, which he helped create in the 1990s. The programs serve underrepresented kids across North America by giving them access to hockey and teaching life skills like confidence, teamwork and leadership. You'd have to fill up the average NHL arena seven times to fit all the diverse boys and girls who have benefited from Willie's work in the community.

Not many people make the choice to give back in such a big way. But then again, Willie's journey is full of rare choices that changed the course of this game. The most important one was definitely Willie's choice to not give up. At the same time, Willie also needed leaders in hockey who were willing to challenge the game's idea of "normal." Back in 1958, the Bruins made a bold choice by giving Willie a chance to play despite the risk of racist backlash. The organization deserves its share of credit for taking the risk.

Now, 64 years later, Willie is joining the most honored names in franchise history because of how he seized his chance and used it to contribute to his team, the sport and our society.

The world has changed a lot in the past 64 years. Still, it's clear that there is more work to do to address the causes at the heart of Willie's story. In hockey, there are more diverse kids who need our help to feel supported and empowered. In society, there are racial injustices that continue to affect Black people and other people of color. As the hockey community celebrates Willie's jersey retirement, we should also view it as a reminder of how much these issues matter, how much progress has been made by past generations and how each of us can keep the progress going by committing to being a force for good.

When you think of it like that, Willie's story will always be bigger than hockey.

But for us, of course, hockey is the reason his story feels so personal.

Every once in a while, when we're both on the ice -- whether we're playing or practicing or running a penalty kill -- we realize how grateful we are to be here together. We get to compete at the highest level in a sport we love, and we're able to share the experience as guys who have gone through similar things on our way to the league. We've had the chance to create great memories as two NHL players who happen to be Black.

And we know those memories exist only because Willie opened the gates for us to follow in his footsteps.

On every team and in every city, there are players and fans with their own reasons to be grateful that Willie wore the Bruins sweater. All of them -- us included -- will look on with pride when No. 22 joins those of other icons in the rafters at TD Garden.

It's an honor that recognizes Willie for his pioneering accomplishments, and it's also a message that will resonate forever: Against impossible odds, Willie O'Ree left an amazing mark on his franchise and on the entire National Hockey League. And we are all better off for it.

Pierre-Edouard Bellemare and Mathieu Joseph are teammates on the Tampa Bay Lightning. Bellemare is in his eighth NHL season, and Joseph is in his fourth.