Anthony Smith put on a dazzling performance on Saturday, as he dominated Ryan Spann with a first-round submission at UFC Fight Night in Las Vegas.

Smith (36-16) was emotional after the bout. He yelled in Spann's direction once the fight was over and sent a message to any of his doubters in his postfight speech.

A couple things to note here. First, many in the sport seems genuinely happy for Smith. And he deserved to be fired up after this one. He's right -- there was some doubt surrounding him going into this one, just as there was going into his past two, which resulted in wins against Devin Clark and Jimmy Crute.

Smith has now put those doubts to bed, but he also created them. This man was seen handing his teeth to a referee in the middle of a fight against Glover Teixeira just 16 months ago. And after that, he rushed into a contest against Aleksandar Rakic and failed to win a single round. 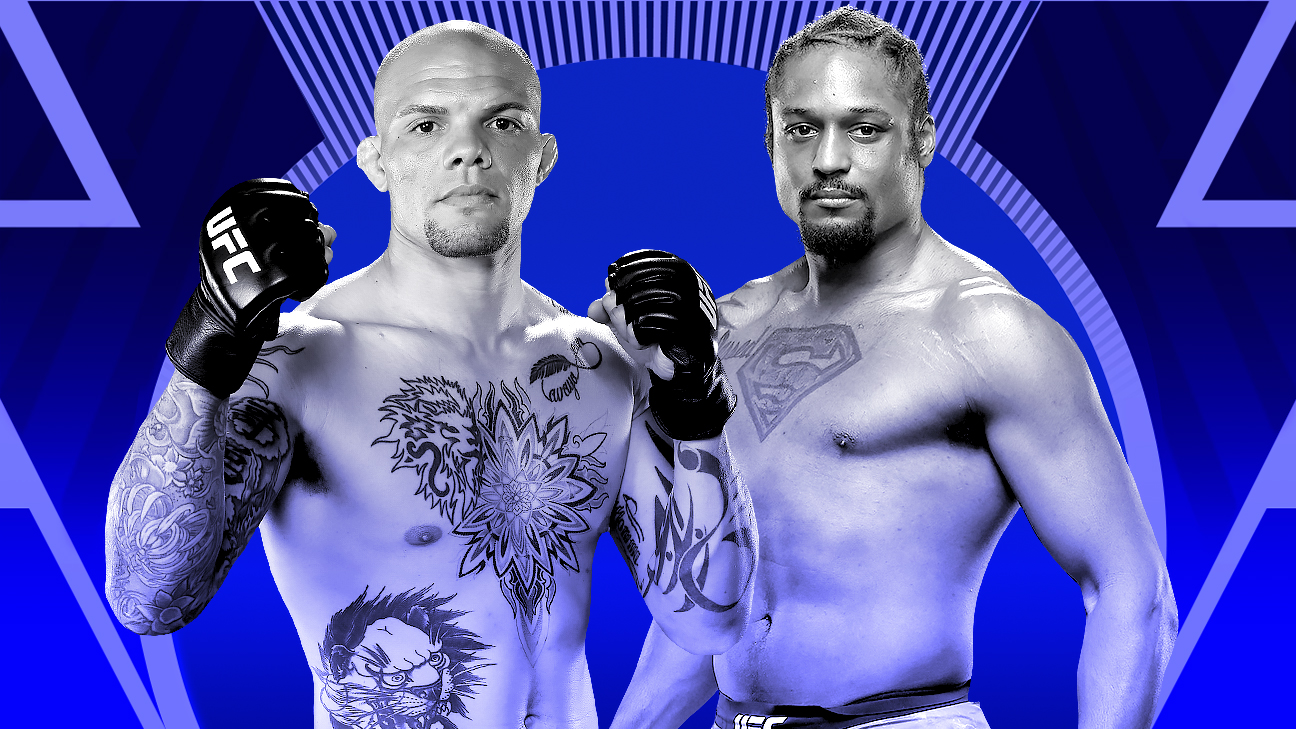 All fights from UFC Fight Night: Smith vs. Spann are available to watch on ESPN+.

And all of this came one year after he lost to Jon Jones in a title fight, a performance he said himself was the worst of his career.

All of that put Smith in a position where he needed to show something, which now he has done. With respect to Spann, Saturday looked like a mismatch. Smith completely outclassed him in every way.

So, Smith is looking like a real title challenger again. He wants a rematch against Rakic. He'd likely be an underdog in potential rematches against Rakic and Teixeira, and against champion Jan Blachowicz. But it certainly seems like he is at least capable of winning any of those fights.

And in the meantime, the relative youth of the light heavyweight division takes another hit. The 205-pound weight class has seen some fresh faces emerge in Rakic and Jiri Prochazka, but some of its other younger talent -- Nikita Krylov (29), Johnny Walker (29), Spann (30), Jimmy Crute (25), Jamahal Hill (30), Michal Oleksiejczuk (28) -- has yet to really break out.

Prochazka is a ton of fun, as is Rakic -- but beyond that, the top of the division has not seen a ton of recent turnover. And it wasn't that long ago it appeared there was a group of new blood to change that. -- Brett Okamoto

Watch Smith vs. Spann on ESPN+

Results from the rest of the card:

Ion Cutelaba stuns Devin Clark in the first round

Ion Cutelaba lands a strong punch that sends Devin Clark to the mat in the first round of his unanimous decision victory.

Cutelaba (16-6-1) was winless in his past three contests going into Saturday, but that did not appear to dampen his confidence. The 27-year-old dropped Clark with a right hand in the opening round and never looked back, as he dominated on the judges' scorecards 30-26, 29-26 and 29-27.

Clark's ability to simply make it to the end of the fight was admirable. He was badly hurt in the first round by that right hand, and found himself in a mounted position at some point in every single round. In between the second and third frames, he informed his corner he'd suffered an injury to his mouth, likely from a Cutelaba elbow.

Wrestling played a big part in the direction of the fight, as Cutelaba repeatedly took Clark down and advanced position. He rarely looked for any submissions, preferring to drop elbows and ground and pound instead. Clark did manage to land a few shots late and spent some time in top position, but the result of the fight was never in question.

In all, Clark surrendered eight takedowns in the light heavyweight bout. Previously, he'd only surrendered three total in all of his UFC career. Cutelaba improved to 5-5-1 in the UFC. -- Okamoto

Tip: If you see someone nicknamed "Queen of Violence" coming in your direction, walk the other way.

Lipski lived up to her moniker to an extent, scoring knockdowns in all three rounds and nearly finishing Bohm in the final minute before settling for a clear decision win (30-27, 30-27, 30-27).

A 27-year-old Brazilian fighter out of Coconut Creek, Florida, Lipski ended a two-fight losing streak by taking the fight to her undefeated opponent. Bohm, who was making her UFC debut, never was able to turn the tide.

Bohm, who is 32 and from Germany, was poised in her first Octagon appearance -- perhaps too poised. She threw strikes that seemed more like rangefinders than attacks intended to end the fight, and that allowed Lipski to remain the aggressor. -- Jeff Wagenheim

Coming in, Tsarukyan was already considered one of the best prospects in the UFC. Mostly, though, it was because of his oppressive wrestling.

Tsarukyan showed a new dynamic to his offensive game on Saturday with a TKO over Giagos at 2:09 of the first round. Tsarukyan countered a body kick with a massive left hook that sent Giagos crashing into the fence. Tsarukyan pounced with a flurry of punches against the cage until referee Herb Dean stepped in to stop it. He has won 16 of his past 17 fights overall.

"[UFC matchmaker] Sean Shelby said you have to finish if you want to grow up," Tsarukyan said in his postfight interview. "And now I did it. I can fight a top-10, top-five guy. Let's go. I'm ready."

He added that he would like to fight Dan Hooker next. The two have been going back and forth on social media over the past few months.

Tsarukyan, just 24 years old, has won four straight after losing his UFC debut to Islam Makhachev in April 2019. The Republic of Georgia-born Armenian fighter picked up his first finish since 2018 -- and his first in the UFC.

Nate Maness gets knocked down by Tony Gravely at the end of Round 1, but comes back in the second for a fantastic TKO finish.

It ain't over till it's over. Just ask Kentucky bantamweight Maness.

Maness (14-1) earned a knockout win over Gravely (21-7) with a piston right hand at the 2:10 mark of the second round. The finish came just moments after Maness was saved by the bell in the opening round, after he was dropped by a Gravely right hand in the very final seconds of the frame.

"That's the first time I've ever been dropped in my whole career," Maness said. "I wouldn't say it was a fun experience, but it was a different experience."

Had the first round lasted a few more seconds, referee Keith Peterson likely would have intervened. Maness fell to his butt along the fence after eating the right hand, and then weakly bent forward to grab Gravely. Gravely pounced and landed a flurry of punches, but the bell cut him off before he could put Maness away.

Maness looked a little slow to start the second round, but after an early tie-up, he moved into boxing range and landed a stiff right hand that sent Gravely backward to the canvas. Another right hand was all it took to put the fight away. It's the first time Gravely has lost via KO in his career. -- Okamoto

Damn!! That was reminiscent of the 155 lb title fight. One guy on the verge of brutal dominance, and the next round, things just change. This sport is CRAZY!! #UFCVegas37

Joaquin Buckley lands a powerful combo on Antonio Arroyo that leads to a TKO finish in the third round.

The fighters had traded mostly kicks from distance in a slow-paced two-plus rounds. Then Buckley, who had been the aggressor throughout, landed a winging right hook to the side of Arroyo's head and followed with a right uppercut that dropped the Brazilian fighter for a sudden victory at 2:26 of Round 3.

Buckley, a 27-year-old from St. Louis, ended the night with a huge hematoma on the right side of his forehead, courtesy of a flying knee by Arroyo in the second round. But that did not stop Buckley from pushing forward, which produced his third win in his last four outings -- all of them by knockout. This was the 10th KO/TKO of his career.

Arroyo, who is 32 and from Brazil, has lost three in a row. He was fast with his kicks, and landed many, but he simply was not active enough to keep Buckley off of him. -- Wagenheim

Nchukwi might have found a pretty solid home at light heavyweight.

In his first bout in the UFC since moving up from middleweight, Nchukwi beat Rodriguez via unanimous decision (30-27, 30-27, 30-27) in a one-sided outing. Nchukwi, the well-muscled, boulder-shaped fighter, landed huge blows, mostly with Rodriguez pushed up against the cage.

Nchukwi (6-1) rebounded from a majority decision loss to Junyong Park in May at middleweight. The 26-year-old Cameroon native is 2-1 in the UFC.

Pennington, of Colorado Springs, put a halt to Kianzad's title aspirations in a three-round decision win.

Going into Saturday, Kianzad (15-6), who fights out of Denmark, had won four in a row -- but she consistently found herself a step behind in this one. Pennington showed a more diverse game than Kianzad overall, and matched the former featherweight's physicality. All three judges scored the bantamweight contest for Pennington, 29-28.

A former title challenger, Pennington (12-8) traded strikes with Kianzad in the Thai clinch for much of the first round. She continued to match Kianzad's output in the clinch in the second and third rounds, but mixed in other aspects of her game as well. She used effective grappling in the second round, and good boxing in the third.

Had Kianzad won, she would have been on the cusp of the title picture, as defending champion Amanda Nunes is always in need of new opponents. Instead, Pennington picks up a big win and moves to 3-1 in her past four. -- Okamoto

Zhu earned his first UFC win with the 12th KO/TKO of his career, beating up Jenkins for the better part of three rounds before getting the finish at 4:35 of the final session.

After getting into danger on the canvas briefly, Jackson took control and hurt Bays several times on the way to his second straight victory (30-27, 30-27, 30-27).

Jackson, a huge betting favorite (-650), had four knockdowns, the most ever in a UFC men's bantamweight fight and tied (with six others) for third most in any UFC bout. It was just the eighth time in UFC history that a fighter in any weight class has landed four or more knockdowns in a fight.

Blanchfield, a -380 betting favorite, controlled the action from start to finish, testing Alpar's toughness the whole way. According to UFC Stats, she outlanded Alpar 120-41 in significant strikes, had a plus-20 or more striking advantage in all three rounds, was three of three on takedowns (while Alpar landed none) and had 9:43 of control time.

Harris cashes as a +100 underdog by swarming Kasanganay and getting the TKO 2:38 into the fight.

He is on a five-fight winning streak, all of them coming by finish (three KO/TKOs, two submissions).

Lopez and Alatengheili fight to the fourth draw in the UFC in 2021. It's Alatengheili's second career draw and the first for Lopez.

Alatengheili was deducted a point in the third round for grabbing the cage.

Goldy opens the show by getting the tapout via armbar at 4:17 of the opening round to earn her first UFC win and her first career win by submission. She cashes as a +105 underdog.

It is Whitmire's third consecutive UFC loss. All five of her career defeats have come via submission. Her four submission losses in the UFC are tied for the most in the promotion since she debuted in 2017.